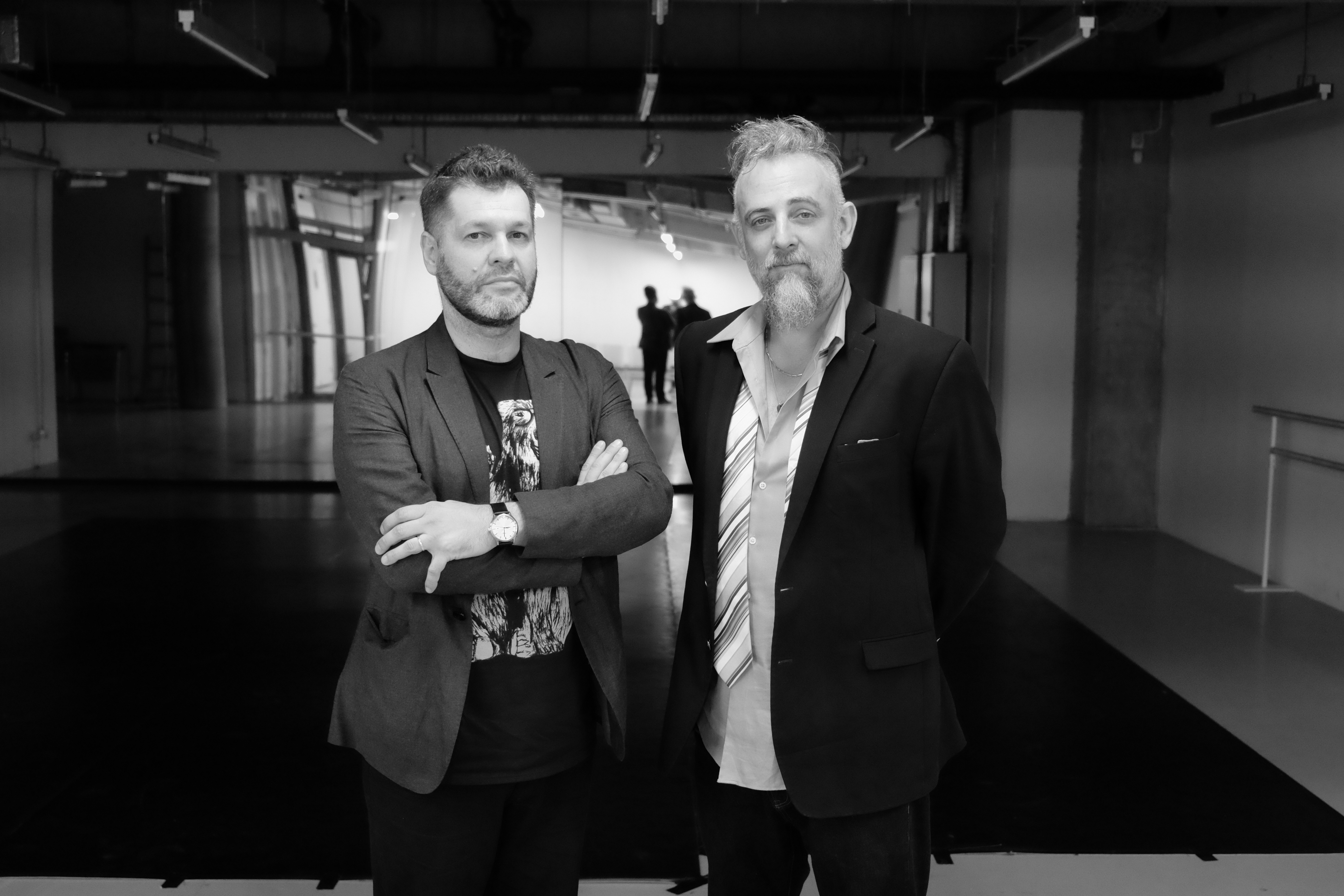 When Romanian-born pianist Lucian Ban and Grammy-nominated violinist Mat Maneri joined up for a concert in an opera house in Targu Mures in the middle of Romania’s Transylvania region, the music was, as Jazz Times puts it, “as close as it gets to Goth jazz.” Released in 2013 by ECM Records, the Transylvanian Concert album features a program of self-penned ballads, blues, hymns and abstract improvisations, the whole informed by the twin traditions of jazz and European chamber music. The album has won critical acclaim on both sides of the Atlantic, including several Best Album of 2013 awards, and has spawned continuous touring. 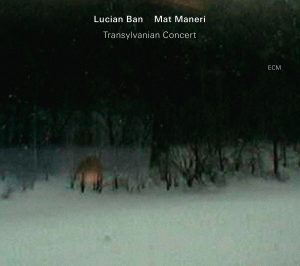 The Guardian (UK) noted  Transylvanian Concert’s “own kind of melancholy beauty and wayward exuberance”, The New York Times called it “a lovely and restive new album”, All About Jazz hailed its “moments of unanticipated beauty”,  L.A. Weekly talks about a performance that is “mesmerizing, evocative and sensually explicit”, and The Village Voice calls it “is one of those records that whisk you away”. JAZZ WEEKLY talks about “A modern collection of sonatas that erase the lines between jazz and classical, a melding of sounds similar to a modern liturgy”. 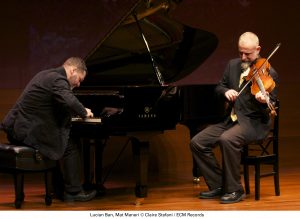 The two musicians first worked together in 2009 in the “Enesco Re-Imagined” octet conceived  as a as a celebration and a contemporary jazz re-imagination of the works of the great Romanian composer George Enescu. Featuring an A list of New York most celebrated jazz musicians – Ralph Alessi, Tony Malaby, John Hebert Gerald Cleaver, Mat Maneri, Albrecht Maurer and Indian tabla legend Badal Roy – the album was recorded live at the 2009 Enescu International Festival in Bucharest and was released to critical acclaim by Sunnyside Records in NYC. The CD won multiple BEST ALBUM of the YEAR  Awards from Jazz Journalist Association and got worldwide press coverage, including concerts in major venues and festivals in United States and Europe. JAZZ TIMES said “Enesco Re-Imagined is visionary third-stream music . . . this recording places Ban and Hébert among the great 21st-century interpreters.” and discussing their London Jazz Fest appearance at Elizabeth Hall The GUARDIAN  talks about its “rare combination of uninhibited but coherent solo and collective improv, shrewd arrangement and dazzling thematic writing”, while London Evening Standard says “ 4* Stars! Romanian jazz can swing like the clappers one minute and break your heart the next”.

Transylvanian Concert won BEST of 2013 by:

“A lovely and restive new album on ECM – recorded in Mr. Ban’s native land – that reveals their shared interest in enfolding mystery”

“It has its own kind of melancholy beauty, and plenty of wayward exuberance, too”

LUCIAN BAN was raised in a small village in northwest Transylvania, in “the region where Bartok did his most extensive research and collecting of folk songs” and grew up listening to both traditional and classical music. He studied composition at the Bucharest Music Academy while simultaneously leading his own jazz groups, and notes that his approach to improvisation has been influenced by “the profound musical contributions of Romanian modern classical composers like Aurel Stroe, Anatol Vieru and of course Enesco”. Desire to get closer to the source of jazz brought him to the US, and since moving from Romania to New York in 1999 his ensembles have included many of New York’s finest players.

“A name to watch.” John Fordham, The Guardian UK

MAT MANERI – 2006 Grammy Nominee for “Best Alternative Album”. Over the course of a twenty-five year career, Mat Maneri has defined the voice of the viola and violin in jazz and improvised music. Born in Brooklyn in 1969, Maneri has established an international reputation as one of the most original and compelling artists of his generation, praised for his high degree of individualism, a distinctive marriage of jazz and microtonal music, and his work with 20th century icons of improvised music.

”Mat Maneri has changed the way the jazz world listens to the Violin & Viola.” All About Jazz

Aa young musician, Maneri was influenced by the sounds of his childhood home. His father, saxophonist and composer Joe Maneri, was on faculty at the New England Conservatory, and colleagues like Ran Blake and Gunther Schuller were frequent visitors. In 1990, Mat co-founded the legendary Joe Maneri Quartet with his father, drummer Randy Peterson and bassists Ed Schuller and John Lockwood. The quartet’s recordings for ECM Records, Hatology and Leo Records were widely acknowledged by critics and fellow musicians as among the most important developments in 20th century improvised music. Maneri’s 1999 solo debut on ECM Records marked his emergence as a musician with a singular, uncompromised voice. Pianist Matt Shipp called him “one of the five greatest improvisers on the planet”, reflecting a growing consensus of Maneri as a central figure in American creative music. Since then, the long list of musicians with whom he has worked includes icons such as Cecil Taylor, Paul Bley, Paul Motian and William Parker, as well as influential bandleaders such as Joe Morris, Vijay Iyer, Matthew Shipp, Marilyn Crispell, Joelle Leandre, Kris Davis, Tim Berne and Craig Taborn. Maneri’s recordings as a leader (trio, quartet and quintet) have been documented on Hatology, Aum Fidelity, Leo Records and Thirsty Ear. More info Mat Maneri

“Their new Transylvania Concert is one of those records that whisk you away—long tone reveries, pulsing pirouettes, contoured introspection, and gypsy joy. Could be transcendent.”

“Lucian Ban & Mat Maneri wrung out not only the great seriousness of this music but also its wit and joy.”

“Transylvanian Concert moves from strength to strength, each player makes the most out of a single note or chord, no matter how small.”

Is it mere coincidence that, on the eve of Halloween, we have a concert by a man from Transylvania? He is Lucian Ban, an extraordinary pianist who years ago fled his place of origin to reside in humble anonymity as a jazz musician in New York, only to discover that his true talent couldn’t be smothered. Word of his musical prowess spread until he was summoned by the city’s jazz immortals, including skin-strikers Pheeroan akLaff and Barry Altschul. His homeland beckoned, however, and Lucian obliged with an appearance in the Cultural Palace of Târgu Mures, deep within Transylvania (now Romania). The resulting album, Transylvania Concert, features Ban and Grammy-nominated violinist Mat Maneri in a performance that is mesmerizing, evocative and sensually explicit. Listening may stir within you that which you can no longer suppress.

European pianist-composer Ban teams with Maneri to celebrate their new, season-appropriate live album, “Transylvanian Concert.” Neither the record nor the show seems overtly intended to evoke Dracula’s fabled home, but the acoustic pairing of Ban’s restless piano and the churning hum of Maneri’s viola remains haunting as the duo ventures through darkened tributaries of jazz, blues and Baltic folk.

All About Jazz USA